Sign up to hear about latest stock, secret previews, sales and more!
Amor or Cupid with a Goose by Sabatino de Angelis & Fils c.1900 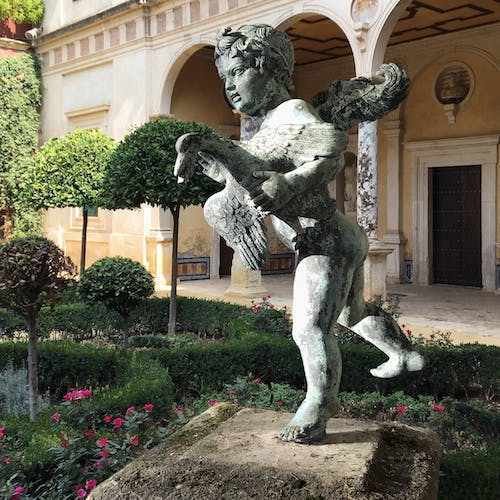 A rare and important work of bronze. Cast c.1900 using the lost wax process by Sabatino de Angelis & Fils founded in 1840 ran a bronze foundry in Naples from 1884 to the early 20th century.
Sabatino de Angelis & Fils were renowned for their cast bronzes using the lost wax process (exactly as the original Roman statues would have been) and were given exclusivity to cast direct from sculptures in the National Archeological Museum of Naples, particularly those from Pompeii and Herculaneum which had been unearthed after being buried under the destructive might of Vesuvius in 79 AD.

This delightful ‘Cupid, Eros or Amor with Goose’ on associated plinth is taken directly from an original bronze found in the “House of The Small Fountain” in Pompeii 1st Century AD which survived the destruction of Vesuvius.
He is a water well God, bringing happiness and good fortune to the Roman home.
The original bronze was positioned within the inward looking peristyle garden, an internal courtyard that was designed to house pools and fountains almost a small garden of proposed paradise. He was once used as a fountain and could be adapted to be a fountain once again, or retained as a work or art on his pedestal.

Cupid is 60cm high without his plinth.
Wear and patina appropriate with age, see photographs.