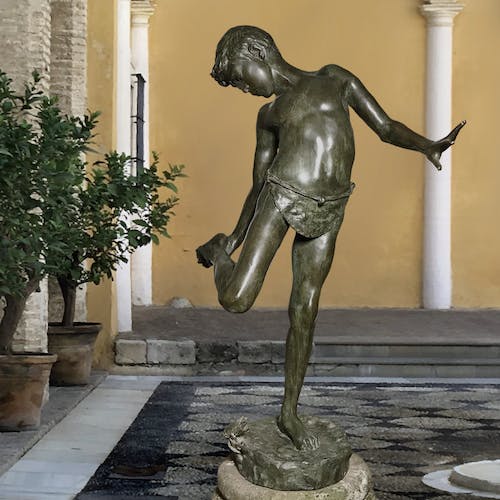 A superb rendition of 'Il Granchio' (The Crab) Bronze Boy with nipping crab.
This Italian bronze figure of a young fisher-boy is a direct wax-cast from the sculpture by Annibale De Lotto in the First quarter of the 20th Century

Annibale De Lotto (d. 1932) was born in Venice and worked primarily in the Veneto. He was celebrated for the numerous public monuments he executed, but also worked on statuettes inspired by his love of the Adriatic. The most famous of these is his young fisherboy, known as Il Granchio, of which the present bronze is a cast.

The fisher-boy is captured in an energetic pose, a moment of shock as his arm outstretched, he is poised gripping his small foot which has clearly been nipped by the sneaky crab at his feet!
The naturalistic circular base cast with a nipping crab and signed to the top De Lotto.

Size below is the bronze itself.