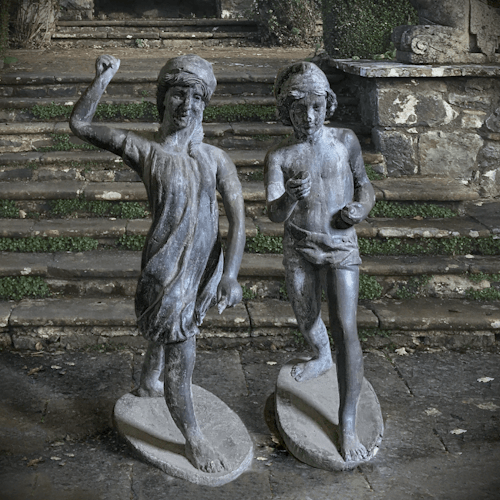 An animated and enchanting pair of 19th Century French lead figures playing the games of Darts and Boule. The realistic female figure is in mid-throw with two feathered darts or arrows with her dress billowing around her. The male is weighing up his aim, mid move ready to throw his turn!
They both wear very important hats known as the ‘Phrygian cap’ or ‘liberty cap’ is a soft conical cap with the apex bent over, associated in antiquity with several peoples in Eastern Europe and Anatolia, including Phrygia, Dacia, and the Balkans. During the French Revolution it came to signify freedom and the pursuit of liberty.
The symbols resurfaced again during the July Revolution of 1830, when they were reinstated by the liberal July Monarchy of Louis Philippe I, and the revolutionary symbols—anthem, holiday, and bonnet rouge—became "constituent parts of a national heritage consecrated by the state and embraced by the public." Philip G. Nord (1995). The Republican Moment: Struggles for Democracy in Nineteenth-Century France. President & Fellows of Harvard College.