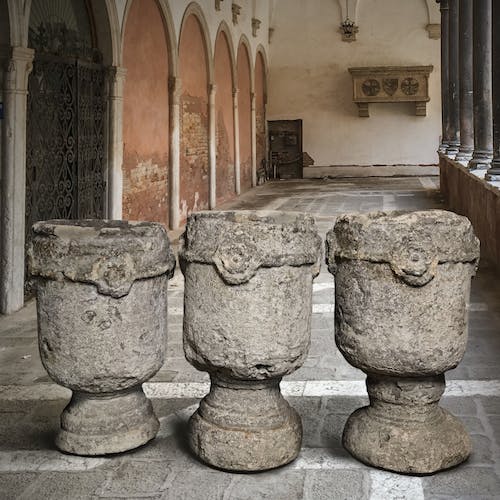 Three breathtaking limestone Tudor Medieval urns with direct provenance from Cumnor Place, the wealthiest and grandest grange of Benedictine Abingdon Abbey, Cumnor, Berkshire. From the collection of Reading Museum. The Abbey’s origins date back to AD 675. The now demolished Place was a magnificent 14th Century stone structure, formed of a complex of buildings enclosing a large courtyard. A 44ft long Medieval Great Hall to the West and other attached buildings including a vaulted Tudor Gatehouse and a small chapel.

. . . . A HAUNTING PAST . . . .Playing an incredible part in British history: after surrendering his Abbey in 1538 during the Dissolution of The Monasteries by King Henry VIII, Abbot Thomas Rowland chose to live here. After his death in 1547 the building was granted to George Owen, the King’s Physician. His son leased Cumnor to Sir Anthony Forster, friend and chief controller of Lord Dudley (later Earl of Leicester)’s private expenses. Dudley’s wife, Amy Robsart, stayed with Sir Antony in 1560 when her husband was away at Court, (he was Queen Elizabeth I’s favourite and acknowledged lover).

One day, the family and servants were all instructed off to Abingdon Fair and returned to find poor Amy dead at the foot of the stairs. Amy had mysteriously been murdered. Dudley secretly hoped that her death would leave him free to marry the Queen - which would have altered the line of The Monarchy and the course of British history - but the appearance of her ghost on the stairs was taken as a sign that her death was no accident and the Queen immediately distanced herself.
Nine parsons from Oxford attempted to lay the unquieted spirit in a nearby pond, thence called ‘Lady Dudley’s Pond’, which never froze again. The house was filled with terrible noises at night therefore remained untenanted. Not long after the incident the house came into the hands of the Norreys Family of Rycote, it was a second home and fell into disrepair, eventually being demolished in 1810 after reports of its oppressive atmosphere gave it little appeal. Rumour has it that the ghost of Amy has found rest, but occasionally she is said to be seen wandering the site of the old house looking for Dudley once again...