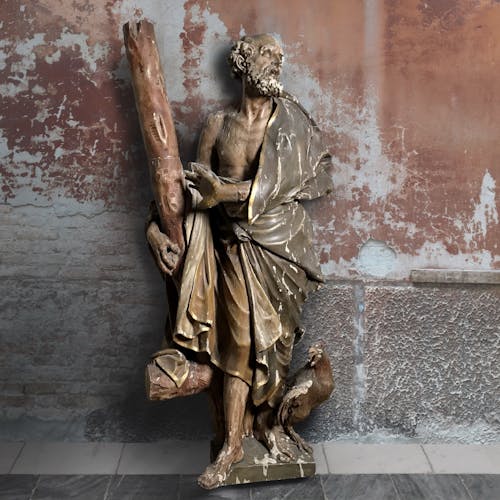 An 18th Century dramatic life-size Italian statue of Saint Peter.
Created from sectional carved wood, gessoed and polychromed. Saint Peter holds an upturned cross with a life-like cockerel crowing at his feet. This striking work of art would be been originally sculpted for a scene within a church.
Depicting “The Denial of Peter”, refers to the three acts of denial of Jesus by the Apostle Peter as described in all four gospels of the New Testament. All four gospels state that during ‘the Last Supper’, Jesus predicted that Peter would deny knowledge of him, and would disown him before the Cockerel crowed the next morning.
After the arrest of Jesus, Peter denied knowing him three times, and just after the third denial he heard the Cockerel crow and recalled the prediction as Jesus turned to face him. As the remembered, Peter began to cry bitterly. This final denial and the bitter tears of Peter is known as ‘The Repentance of Peter’.