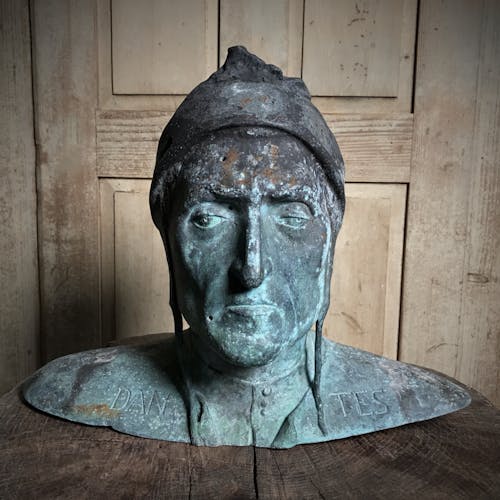 A 19th Century bust of Dante in bronze, cast through the lost wax process by Sabatino de Angelis & Fils founded in 1840 ran a bronze foundry in Naples from 1884 to the early 20th century.

This imposing portrait of Dante is taken directly from an original bronze found in “Villa Farnese” in Rome.
Dante Alighieri was an Italian poet c.1265-1321. He famously scribed his ‘Divine Comedy’ and widely considered the most important Poet of the Middle Ages.

Sabatino de Angelis & Fils were renowned for their cast bronzes using the lost wax process (exactly as the original Roman statues would have been) and were given exclusivity to cast direct from sculptures in the National Archeological Museum of Naples. This piece is reproduction from the bronze original in the museum. Another example can be found in the V&A.