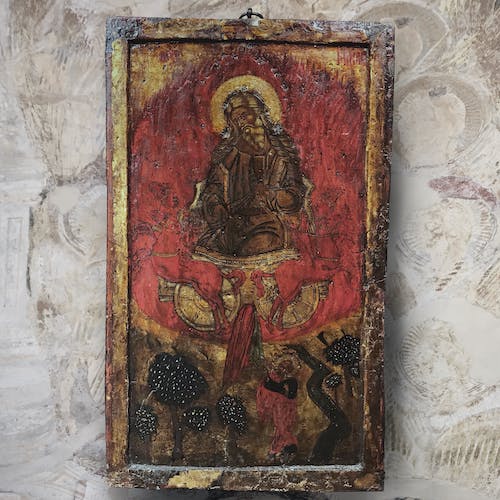 In Russia one of the earliest Novgorod churches dedicated to Elijah was erected in 1198–1202.

Featuring the Prophet Elijah ascending to Heaven riding a quadriga (Greek: τέθριππος, translit. tethrippos, lit. "four horses") , a car or chariot drawn by four horses abreast (chosen for chariot racing in Classical Antiquity and the Roman Empire until the Late Middle Ages), which Peasants used to believe caused thunder when he rolled across the sky.

The image of the large fiery aureole held by the Archangel Michael first appears in Russian painting of the 14th century. The icon follows the traditional format prevalent in the 15th–19th centuries. His image was particularly popular in the northern areas of medieval Rus and he was venerated for the protection of cattle feed and healing.

This evocative work of art is a Russian School icon created in the 17th Century with later 19th Century restoration to the front. Painted in egg tempera and gesso, front and back, on a wooden panel. Worth noting is the reverse of the panel unusually retains its original gesso with religious typography..