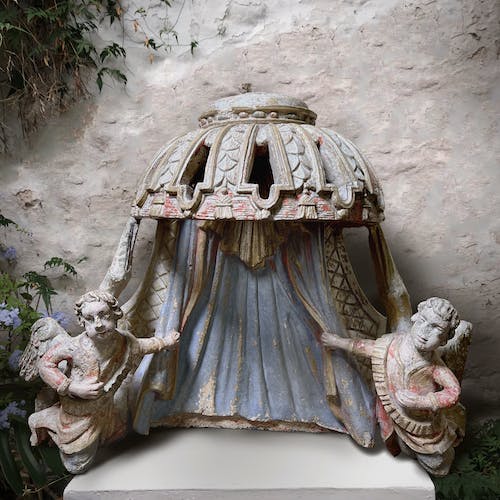 The intricately pierced carved frame of the canopy is decorated with tasseled pendant garlands and is raised and supported by voluptuous heavenly blue curtains which have an illuminating gilded sunburst radiating down the baldachin. The drapery us held apart by by two celestial Angels or Cherubs - their arms clasped to their chests gesturing towards the centre of the canopy and what lies within. The exuberant serene personality of the Angels, their arms gently stretched and clasped, but also the morphology of their bodies with plump cheeks and knowing secret smiles, their draped coral red tunics, their hair with softly wavy locks revealing naively sculpted faces.

Created in the second quarter of the 17th century in Italy.
Similar works of art and worship would have graced church facades and niches, walls of palaces or used as devotional pieces within wealthy private Noble chapels. They were also used on altars, as altarpieces, shrines, tabernacle or reliquaries.