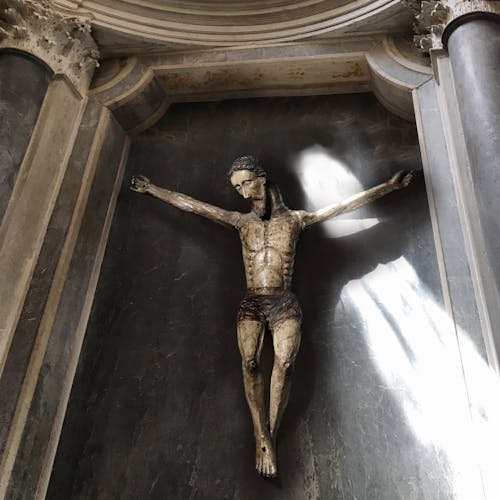 This evocative large Corpus Christi shows Christ Crucified.
Dated around 1560. Spanish Colonial.
The bearded figures eyes are closed, the features deeply sorrowful and charged with emotion.
There is a deep wound present on Christs torso, speckled with blood, showing where the ‘spear of destiny’ entered Christ. The body is emaciated and his outstretched crucified arms painted with rivulets of blood from the nails of crucifixion. Depicted wearing a deep gold and red loin cloth, his pale bright figure has a wonderful sculptural quality.
Unusually and remarkably much of the original polychrome and gilding remains upon a carved wooden, gesso and cloth covered base.
The imposing figure of Christ was created to move the audience to prayer and empathy, rather than impose a notion of serenity and contemplation. The followers are urged to repent for man’s inhumanity.
A rare and exquisite example.