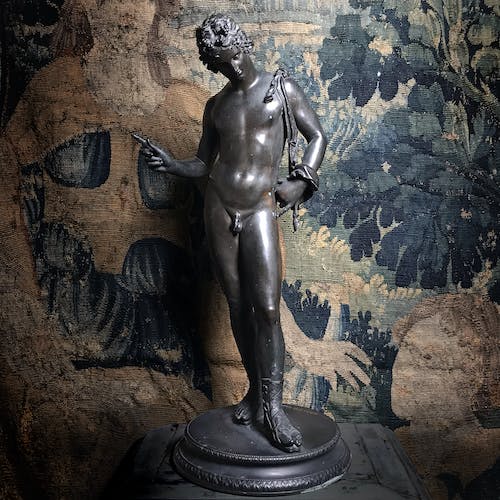 Cast using the lost wax process and with dated signature of Sabatino de Angelis & Fils, Naples 1889.
Founded in 1840, the famous foundry in Naples operated up until the early 20th century. The Foundry was renowned for their cast bronzes using the lost wax process (exactly as the original Roman statues they were casting from would have originally been created) and were given exclusivity to cast direct from incredible sculptures in the National Archeological Museum of Naples, particularly those from Pompeii and Herculaneum which had been unearthed after being buried under the destructive might of Vesuvius in 79 AD.

This piece is exceptionally finely cast directly from the original bronze sculpture on a bronze base. The original, was discovered in 1862 in the archeological excavation of Pompeii, is now in the Museo Nazionale, Naples.
This early cast is in excellent condition, and the details are distinctive, sharp and delicately formed.

The 1900 Sabatino “Catalogue Illustré” in regards to their collection of bronzes that “ [this] is absolutely the first and most complete of its kind. It contains all the masterpieces of the main museums, in addition to a complete collection of everything that has been found to date in the excavations of Pompeii and in the lava of Herculaneum.
A 60-year-old activity and the constant goal of reproducing ancient works with the greatest possible precision have obtained the highest rewards […]”
This piece is on page 43 listed as item 5003.