Sign up to hear about latest stock, secret previews, sales and more!
The ‘Medici Vase’ by Andrew Handyside Company c.1851-1887 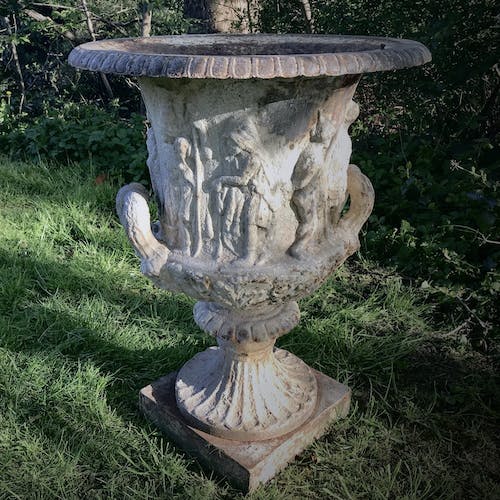 The Medici urn (after the antique Medici Vase) was originally exhibited by the Handyside Foundry in the Great Exhibition of 1851. At the time the Foundry was described as being “from the magnitude of its operations is second to none in England”. Andrew Handyside bought the Britannia Iron Works in 1848, and manufactured several ornamental vases in classical purity, form and ornament. Receiving distinctions at the Great Exhibition in 1850, the quality of their casts were exceptional and became more exceptional with time. They produced three catalogues, in 1848, 1874 and 1880

The Medici Vase is a monumental marble bell-shaped krater sculpted in Athens in the second half of the 1st century AD as a garden ornament for the Roman market. The Medici urn was first recorded in 1598 in the inventory of the Villa Medici, Rome.

The rim of the urn is decorated with egg and dart moulding to a gadrooned everted lip. Classical figures adorn a deep frieze carved with a mythological bas-relief: a half-draped female figure Iphigenia seated below a statue of a goddess on a high plinth, restored as Diana, with heroic warriors on either side, perhaps Agamemnon and either Achilles or Odysseus standing to either side.
Two fluted loop handles rise from satyrs' heads terminals on either side of the acanthus-leaf carved base, standing on a spreading gadrooned base on a low square plinth.

In 1780 the vase was relocated to Florence, it now resides in the Uffizi Gallery situated centrally on the first-floor Verone sull’Arno overlooking the River Arno.
It was often illustrated in engravings, the most famous of which is by Stefano della Bella (1656); he depicted the young Medici heir who would become Grand Duke Cosimo III seated, drawing the vase. The vase was one of the most popularly reproduced antiquities being copied in marble, bronze, terracotta, alabaster and cast iron.